San Francisco is a city of murals: from the Progressive Era to the waves of Latin American immigrants in the 1970s and 1980s, the city’s radical history lends itself well to splashes of life and color. By the time the Mission Muralismo movement peaked in the 1980s and 1990s, San Francisco was post-industrial, grimy, and full of artists and punks: in a sense, the perfect locale for a burgeoning graffiti and mural scene. 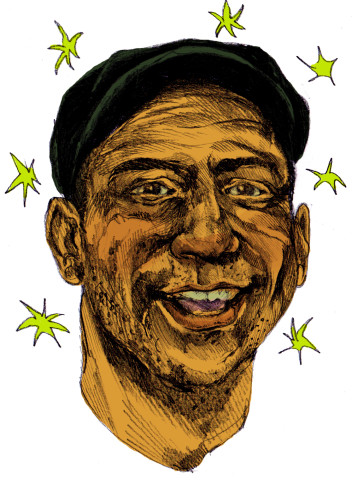 As an artistic genre, the mural has always been a proletarian and working-class form. Part of this is practical: murals take teams of people to produce and maintain, making it an inherently communal mode. Likewise the location of display is massively public; they’re hard to contain in pricey museums. There is no art form that the homeless and working-class have more exposure to or interaction with. There’s also the question of the canvas: public art, sprayed on a building or mopped with rollers, contains its own inherent structural criticism of private property. Does the building owner own the mural, or do we all? And who has the right to remove or paint over? If a movement like Occupy was notable for questioning the definition of public space and causing us to rethink the Commons, murals do the same thing, every day, in their own quiet way.

Sirron Norris is one of the pre-eminent muralists of the San Francisco mural scene. Norris moved to the West Coast in the ‘90s in order to pursue a career as an artist and—he hoped—to leave behind the racism he had faced in his native Ohio. Even if you don’t know his name, you almost certainly know his art, which tends toward bright, jaunty compositions, often starring cartoon bears amidst saturated Victorian houses. His pastel-heavy San Francisco is warmer and livelier than the real one—a meditation on the space we inhabit together and a suggestion of what it might be.

We sat down with Sirron Norris to talk about his work, his experience in San Francisco, and the relationship between art, the commons, and gentrification.

When did you start doing murals around the Mission?

My first mural was in 1999, around that winter. Back in the day, in particular at Bryant and 20th where my first mural is, there was just a convenience store—major thoroughfare for Bryant Street—and it was just a ghetto. People were tagging up that building, and I went up to a guy and I was like “I’ll do a mural here”—and I didn’t even know how to do murals. I just assumed that you use house paint. And I did. So he gave me this spot, and he paid me like $800. I got more opportunities to do murals after that. I got known as a muralist, I guess, even though that wasn’t really what I was trying to do, but I like the idea of basically having free advertising. I thought there was something in that. And if you’re an artist and you’re trying to get yourself out there—well shit, if you have a billboard with all your artwork that everybody drives by every day it just lets them know who you are. 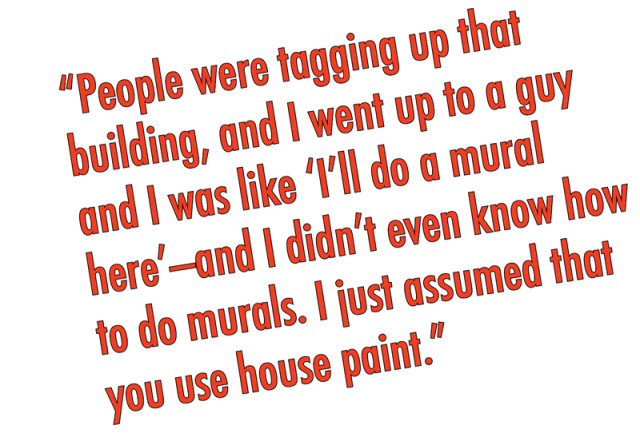 It was initially a very selfish endeavor, painting murals. I was just trying to get my work out there so I took any opportunity I could find. And back in the day here, nobody cared about the Mission, so now I look back and it’s like “fuck, I got this corner of 17th and Valencia right at the edge of Clarion Alley. Coca-Cola would kill to have that spot to put an ad there. You can’t help but see it.” And I had that spot—and I’ve had that spot—for like 15 years. I didn’t buy it, somebody was just like, “This is your spot. You can do whatever you want.” And I just keep it up and I just paint it, and I have that opportunity to express myself and people are always going to see it.

But now I have all these spots that influence people, and the older I got, I was like, “Well, murals can be something much more powerful than I thought, and they have this responsibility.” The longer I was in the Mission and the more involved I got in my community, I started to realize that there is responsibility in that, that murals are supposed to remind us of our history. I was in a community where there were a lot of murals but the murals were very depressing in subject matter, dark and depressing even though they were painted with beautiful colors. A lot of them were about the Salvadoran Civil War. The way I was looking around, all the murals were about what nationality people were and the plight of their people. I didn’t come from that and so in terms of me making subject matters or making murals, I didn’t know anything other than to just paint about myself. It was very selfish and so all of my murals were about myself.

Do your murals observe what’s happening in the Mission as an outsider?

Yeah, totally. I thought it was important that I talked about my history in the Mission and what I’ve seen. And the biggest thing that was always here was “gentrification, gentrification, gentrification.” Constantly, constantly, fighting, fighting, fighting, “gentrification is wrong,” “real estate demons.” My whole time in the Mission was that nonstop. Also seeing that nonstop, but with no progress, just getting plummeted, you know like protest, protest, protest—but the machines and construction vehicles are just plowing those people over, tearing buildings down and building more condos. It was just like a constant lost battle and nothing ever changed other than, more people were yelling and more things were getting built.

And so I was like, after years and years of being here, I just started to get this idea of what gentrification was and what it meant to me and my experience with it, and it just didn’t seem so black and white to me. And I felt the only way to express how I felt about it was just to be cynical about it. 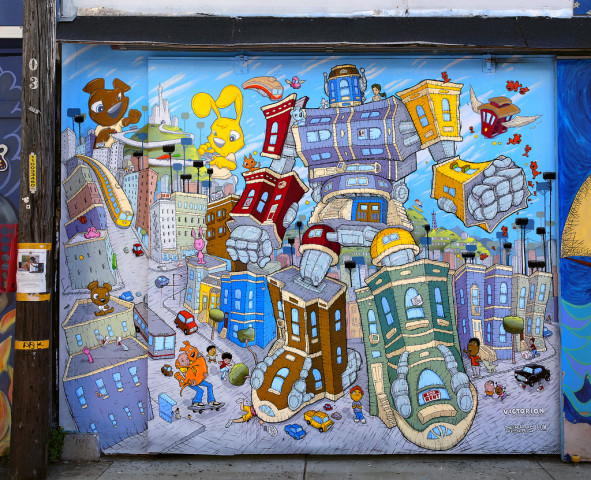 Where did the inspiration for the mural in Balmy Alley come from?

If you go further down the middle of Balmy Alley, that girl did one recently, probably about a year and a half ago, and that one’s really didactic in terms of gentrification. It’s very current, very apropos for everything that happens in that block, very concise. My problem with doing something like that is that it’s dated. I was very adamant about making a mural that talks about gentrification that isn’t dated, that wouldn’t say “okay, this is this time period.” Because that’s not what it’s about, and that actually goes against the whole point of trying to express gentrification because we should be talking about it in the long-term. Because the whole idea is to send a message, and maybe possibly teach, and maybe possibly make people aware of this idea that preserving what we have around us is important, because we’ll never be able to get it back if we let that go away.

Liked this article? Read about dancers in the Mission fighting gentrification.