When it comes to sports, calling me a fair-weather fan would probably be… well, fair. At the last Super Bowl party I attended, I announced my intent to leave after the next inning, to the chagrin of everyone around me. I was swiftly corrected, my colleagues seemingly less concerned over my departure than my attempt to count the innings in football. I’d thought it was simple: there were four.

When I moved to the Bay Area from Hawaii nearly five years ago, I got my first taste of what serious sports fans are like. Sure, I’d come across a friend’s uncle with a Denver Broncos tattoo once, and had an ex-boss who used to root for the Yankees. But coming from a land more known for its professional surfers and pineapples than major league teams—in fact, it has none—I simply couldn’t identity with peoples’ attitudes towards local teams that were nothing short of fanatical. I interpreted friends’ intense emotional attachments to the wins or losses of the Raiders, Niners, Giants, et cetera, as a fierce, almost nationalistic pride—one that I just couldn’t understand.  So, working in bars and restaurants in a community that actually had, and therefore supported, local teams was a new cultural experience for me, and slowly my dismissal of sports fandom began to change. 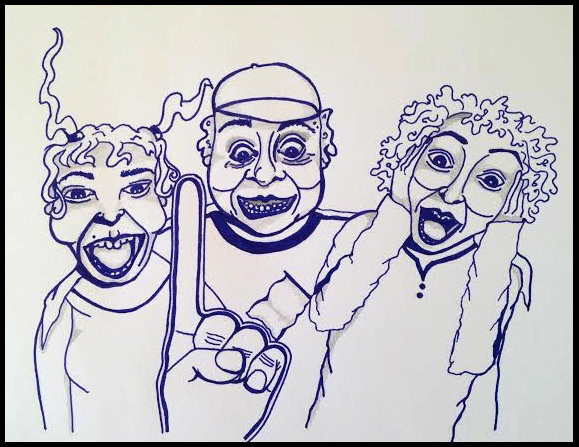 It began with my cocktailing at an Oakland bar back in 2010 when the San Francisco Giants won the World Series. The closest thing I could possibly compare this to in Hawaii would be the University of Hawaii Warriors making it to the Sugar Bowl on a freak–winning streak back in 2008, which turned star quarterback Colt Brennan into a household name, and threw the islands into Warrior fever. For weeks, a sea of forest-green U of H t-shirts lapped on the islands along with the Pacific, and even their crushing loss was ultimately forgotten in the context of making it that far. At the time, that excitement seemed silly to me (frankly, I skipped the Sugar Bowl to suntan), so I certainly wasn’t expecting to get swept up in the 2010 World Series.

But I did. I found myself actually paying attention, learning names of the players (and choosing favorites), donning black and orange outfits and checking scores on my computer amidst homework, something I would’ve scoffed at a year before. I have to admit however, that I was, and still am, somewhat of a poser: I wasn’t in it for the sports so much as the good vibes. Sure, the collective excitement radiating in the streets piqued my interest in the actual games themselves. But admittedly, I’m a junkie for human connection, and being a fan of a sports team offers you this opportunity in a form that’s rare in today’s society.

Capitalism values individualism above all else, and this is the mantra of our modern existence. Though we’re more connected than ever before through technology, though we are able to talk face-to-face through our mobile phone with a human half a world away, we’ve been conditioned not to interact with the person sitting next to us on the bus, and elevator rides are often awkward conglomerations of people trapped within a few square feet and pretending that the others don’t exist. Conversing with a stranger, or even making eye contact, is the exception, rather than the rule, of our normalized social interactions.

Not so when it comes to sports enthusiasts. The concept of a collective identity, of being united with others you don’t know over a common goal, interest, or value, is the bedrock of fan culture. One of the few things I can compare this to is being part of a protest, and that sense of connection you get when you have masses of people participating for the same reason. It’s a high in many ways, similar to being in a bar where everyone is cheering on the same team: the feeling that we are all in this together.

Shortly after the 2010 World Series ended, the Arab Spring began. Popular uprisings and revolutionary waves began to topple regimes in the Middle East, as its people demanded better quality of life and a more righteous and fair society. Inspired by these events, social movements spread worldwide, including massive protests in Wisconsin over a union-busting bill, which set a historic precedent as people came out in numbers unseen since the civil rights era, echoing the same demands for change heard across the globe. During these events, photos went viral of protesters around the world voicing support for one another: Wisconsinites showing their support for Egyptian workers, and vice versa. One image showed three Egyptian men holding a sign reading: “Egypt supports Wisconsin Workers: One World, One Pain.”

That profound statement shows the power of a collective identity forged by class conflict: the division between the few, elite profiting and the majority going without. Egypt’s working class immediately identified a common interest with U.S. workers that superseded cultural and spatial differences: an interest in democratic access and equality. An invisible wall had been broken, and a connection made. There’s a sense of power in numbers, but that feeling only comes with a common thread that holds people together.

Unfortunately, this feeling isn’t accessible through a protest any day. It’s not simply a matter of calling for a demonstration but dependent on the historic context, social forces, and those few magical moments in the development of societies where one event becomes a catalyst for change and opens the floodgates for collective action. You can’t plan this, and you certainly can’t purchase it. Organizing and educating are tools that can help prepare and push us toward these periods of social movement, but on the rare occasions that this kind of activity takes place, the feeling of unity is often quickly smothered through state repression in its attempts to maintain the status quo.

Today, our political climate in the U.S. is not one that facilitates this type of human connection; isolation, rather than collective action, is widespread. Many people have never felt the exhilaration of being part of a large group fighting for something in common, or felt the sense of common identity palpable in that environment. One arena of society you can go to for this sensation however, albeit on a different and more superficial scale, is the sports arena. 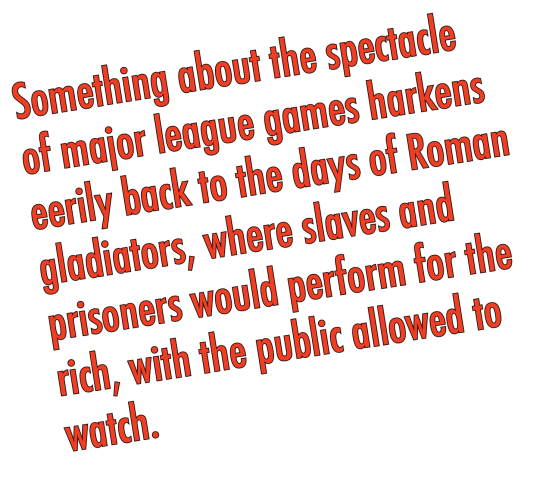 Don’t get me wrong. I’m not comparing the Super Bowl to a social revolution, nor is this in any way an attempt to paint the world of competitive sports as an utopia—far from it. It’s a corporate enterprise that feeds on hyper-masculinity, and in many ways functions as a breeding ground for nationalism, succeeding to divide as well as unite. Something about the spectacle of major league games harkens eerily back to the days of Roman gladiators, where slaves and prisoners would perform for the rich, with the public allowed to watch. Although the pros are paid well by our standards, it is not uncommon for professional athletes to have come from poverty, and as players they are traded and controlled by owners far wealthier than they will ever be. Our allegiance to the game acts as yet another distraction, adding to social complacency; it practices a consumerist approach to athletic ability, with teams essentially functioning as brands; there’s the class dynamic of access as requiring money, and extreme racialized and gendered dynamics of power involved (See: Jason Collins; Donald Sterling; Ray Rice, etc.). Also, don’t even get me started on those over-sexualized cheerleaders and all of the patriarchy that they represent. But that’s a different article.

This one is about sports and fandom existing as a form of collective identity and action in a society where structural forces work to prevent that kind of identification, where the beautiful struggle more often feels like a struggle than beautiful. Part of the appeal of cheering on a team is its ability to allow us to feel in common with one another. The way workers in Egypt and the U.S. were able to recognize their human connection through a common fight, so can two strangers walking down the street when one acknowledges the other for wearing a Raiders jacket. These small exchanges between those who root for the same team show that when people feel commonalities with one another, they do want to connect, whether that team is the Oakland Raiders or the global working class.

If you need proof of this—and if it feels safe to draw attention to yourself—try wearing a shirt supporting your local team and taking a walk through the streets. This is especially fun if the team is on a winning streak or competing for a championship. You will get a reaction. That the San Francisco Giants have made it into the postseason creates a perfect opportunity for this kind of social experiment.

Watch random people begin to strike up conversations with you about the last game, cheer at you from across the street with a grin and a fist pump, and smile at you in a way that might usually rouse suspicion. Experience normal social boundaries and disconnection melt away as we have an excuse to just be friendly and interact with one another, reminded that, in fact, we’re not so different after all. Set your arbitrary, socially constructed differences aside and feel the warmth in your stomach as you stand with the crowd cheering on a game-winning homer, and observe as strangers hug and high-five one another, laughing and shouting in excitement. I promise that even the most cynical about sports will feel these interactions pull on their heartstrings, these small reminders of our human connection that is typically so drowned out.

Granted, I realize not every Athletics fan is, like me, in it for the communal comforts they find in baseball. And yes, the stakes are higher for those true fans, as emotional highs can be trumped by the emotional low of a huge loss. Still, I can’t help but feel the love for my fellow Oaklanders as we trail into the Coliseum laughing and celebrating the night together. This connection that the game provides, —as we sing “Take me out to the baaaaaallgame” in unison and the crowd gets silly, dancing to pop music in our attempts to get on the big screen—is simply a feel-good thing, an end in itself. That motivation cannot be dismissed, and it has the potential to reach beyond sporting events. It has the potential to impact discourses about what we need as a society. And even if it doesn’t, then at least we can enjoy the game.

One thought on “Finding Fandom”