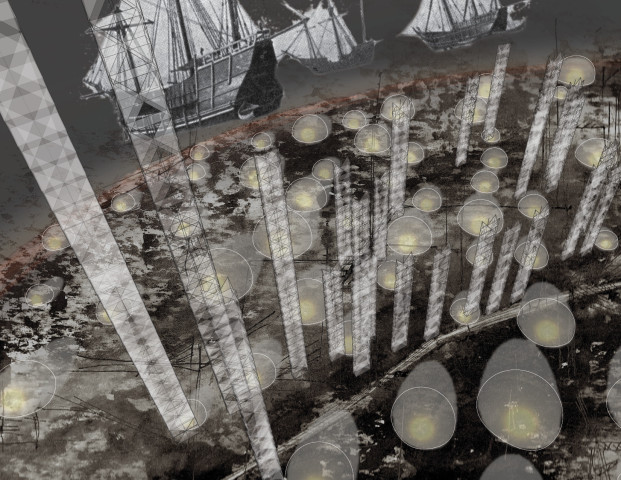 The collective consciousness of Wikipedia, in their plot summary of Interstellar, wrote1 that the film’s version of the USA depicts an “agrarian, stateless society.” In Nolan’s not-so-distant-future, America is ravaged by Dust Bowl-size superstorms, crop failures are abundant, and Big Government is a thing of the past—indeed, there’s hardly any government at all, save an allusion to a “federal” textbook. In this world, where the conspiratorial, anti-government pundits seem to have won, the moon landings are widely regarded to have been faked. (Professional conspiracy-mongerers like Alex Jones and Glenn Beck have reason to smile at this.)

For decades now, there has been a cultural consensus that the United States ain’t the superpower it once was. If you believe a civilization’s “success” is measured by  its large-scale science and engineering projects, then indeed, the post-Apollo years have been a letdown. The idea that we are a fading empire resonates deeply for many American culturemakers, Director Christopher Nolan among them. Hence in the beginning of Interstellar, Nolan hammers this point home with increasingly sappy, unsubtle visuals: Coop, the film’s patriarch, plays with his lunar lander model at the kitchen table and encourages his curious daughter to take an interest in science and engineering.

A supernatural experience sends Coop and his daughter on a pickup truck adventure to a secret NASA building, perhaps the only of its kind, where he discovers that not only does NASA still exist in the post–welfare state world, but that their scientists are still dreaming big. Very, very big: as the Earth slowly dies, researchers plot to save humans by colonizing distant planets, constructing massive rockets to achieve this.

I grew up in a family of fond science fiction readers, inundated with tales of humans and aliens living on other worlds. This, and the influence of scientist parents, led me to believe that colonization of the stars was inevitable and natural, a combination of the explorer’s ambitions and the survivalist’s belief in perpetuating the human species. 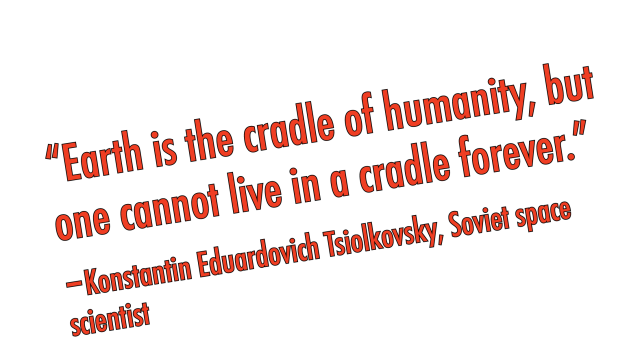 The trope of human colonization of other worlds is so ubiquitous, it is difficult to recognize as a trope at all. Often, this taken-for-granted notion is the backstory, rather than the driving plot, of our science fiction: sci-fi video games begin long after space colonization, with no need for background as to how we got there (Halo, Starcraft). Star Trek, Star Wars, and Firefly depict worlds where space travel is normal, colonization humdrum.

I wonder how much this is an extension of a Western colonialist mentality, and how much it is just burned into us from entertainment consumption. One could argue that some aspects of colonialism don’t transfer to dead worlds like Mars, where there are no natives to abuse and enslave—just a dead, hostile, oxygen-deprived frontier. Indeed, the habitable worlds in Interstellar are also lifeless, meaning the film dodges deeper questions of colonialism that are more prominent in Avatar, Star Trek, or even District 9.

There is, of course, a second, less-popular strain of fiction about humans going extinct with their dying planet, taking the end days in stride and remaining where they are to rot. Such tales have a much more Zen sentiment to them, in their resignation towards the inevitable. (Supposedly Buddha’s last words were “all things must pass.” Humans included.) Consider Margaret Atwood’s fatalistic Oryx and Crake series, where scientific hubris (particularly in genetic engineering) and the decline of the social welfare state collide to bring about our species’ end days.

Coop is both an idiotic and a brilliant name for the spacefaring explorer protagonist of Interstellar. Idiotic in its opaque, nicknamey, everyman-ness—as if a consulting firm determined, through market research, the ideal moniker for a white, all-American, patriotic, family-loving astronaut. Yet it’s clever for the double-entendre with co-op (perhaps unintentional). In Interstellar’s more epic moments—and as the film progresses, it unequivocally morphs into an epic—it approaches, though never fully becomes, an ensemble film; Coop is undoubtedly a hero archetype, yet he stands on the shoulders of giants and is ever-reliant on a communal team of scientists, machines, robots and attractive coworkers.

This is unusual for Nolan’s films, which usually wear their hyper-individualism on their sleeve. Indeed, the moral of his Dark Knight trilogy was, seemingly, that police are inherently good, people can’t govern themselves, and lone vigilantes are a positive force when it comes to policing our violent selves. (Watch my take on the Dark Knight Rises here.) Not so in Interstellar, where even in a survivalist United States with nary a cop to be seen, people are largely peaceable (and white, interestingly).

When Nolan’s hackneyed characters lament that the United States has lost vision, what they really mean is that our nation has lost the capacity for big government superprojects. Nuclear energy, the Internet, the computer, CERN, ITER, and the moon landings were byproducts of big government spending driven by a mix of real science and competing nationalisms. Yet these massive government budgets only existed because of a decades-long labor movement that incurred a policy dogma of high corporate taxes and a progressive income tax. This, in turn, created enough federal spending money for the aforementioned pie-in-the-sky projects, with monies to spare on anti-poverty programs and near-free public higher education.

Big government ambition has died because of neoliberalism—the current hyper-capitalist, let-the-market-decide dogma that initiated with Reagan and now governs both American ruling parties, and indeed most of the world’s dominant political parties from China to India to Russia to the US. Low corporate taxes, a lack of democracy in the economic sphere, bank bailouts and regressive taxation necessitate that we will never again have federal dollars to spare for ambitious space travel, even if the populist will is there. Indeed, future space colonists might be sponsored by corporations desperate to create new consumers on other worlds (the cynical basis of space colonization in Richard Morgan’s Takeshi Kovacs novels). If Coop’s populist dream of space travel is dead, it’s more due to the reigning market ideology than a lack of interest in science.

1 As of writing, the wily collective consciousness of Wikipedia has since removed the word “stateless” from Interstellar‘s description, though as with any crowdsourced project it may reappear in a later edit.