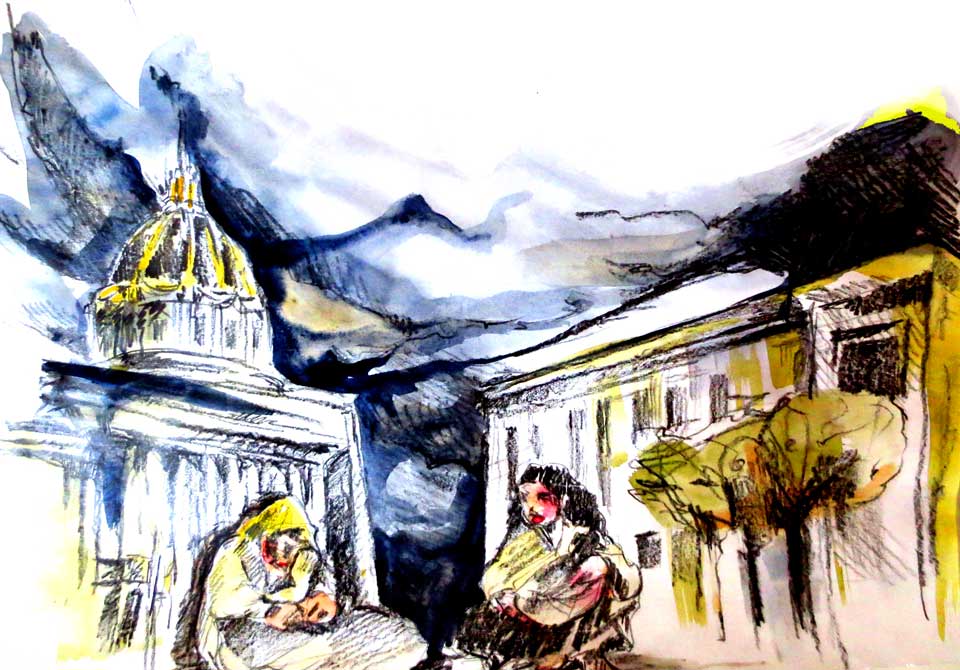 In an editorial entitled “SF needs to make the Main Library safer,” the San Francisco Examiner lauded Mayor Ed Lee’s effort to “institute stronger consequences for breaking the rules” at the main branch of the San Francisco public library. “Give Mayor Ed Lee credit,” wrote the editorial staff. “[Lee] is right in making a big push to rid the Main Library of what he called [the] ‘small number of people who create disturbances and commit crimes, tarnishing the experience for everyone else.’”

“People who commit crimes” is a rhetorical construction designed to obfuscate. If the Examiner were being truthful, they might have rephrased this sentence to something like: “people—many them poor, and many of whom have untreated mental illness, and have no where else to go—whose desperation leads them to commit crimes.” The truth is that poverty in San Francisco’s civic center is nothing new—nor is the civic tendency to criminalize them.

Back in 1961, when Jane Jacobs published her seminal work The Death and Life of Great American Cities, she noted the failure of San Francisco’s so-called civic center construction project as a means of driving out poverty.  The civic center, she observed, “placed near the downtown and intended to pull the downtown toward it, has of course repelled vitality,” and attracted “blight.” Jacobs wrote this 45 years after construction. Now, almost a hundred years later, citizens who are down on their luck are still seeking shelter in the civic center and adjacent Tenderloin district.

Mayor Lee, a stalwart booster of the tech boom currently transforming the city, seems oblivious to the history behind San Francisco’s downtown poverty. The recent influx of wealth has generated massive sums for city coffers and given developers a direct line to the planning commission. Yet the tech boom has not spread the wealth evenly. The Chronicle notes that even as the economy booms, store owners and residents in Hayes Valley, just six blocks west of the main library, “have seen more homeless people congregating in the park[,] sleeping in storefronts, relieving themselves on the streets and even setting up sidewalk tents.”

As unreceptive as Lee is to the travails of the poor, his connection to the tech industry is five bars strong. When Twitter and other tech companies threatened to leave the city lest the council give them a payroll tax break, the city council capitulated. The deal, termed the “mid-Market tax break,” was a gift from the city to the tech corporations of at least 50 million dollars.

If San Francisco is capable of opening wide its doors for the tech carpetbaggers, why can’t it do the same for the long-time residents being pushed out? That the city is overwhelmingly hospitable to the tech gentry while increasingly hostile to its growing homeless population highlights the convolution of their priorities. Crime in the library is not a result of some latent evil lurking in the hearts of the underclass, but rather, the collective failure of the city to provide housing, social and mental health services.

Mayor Lee and the Examiner’s “hard on crime” rhetoric is cynical at best and meretricious at worst. Crime does not exist in a vacuum. In many cases, those who take refuge in the library do so because there is simply no place for them to go. A library is a cleaner, safer place than most. Laws like Sit-Lie have criminalized dwelling in the commons, transforming civic space into something more like private property from which “trespassers” (read: homeless persons) can be booted at will. Meanwhile, just ten blocks east of the library, the tech buildings and their landlords rest comfortably knowing that city policy protects their right to exist and thrive, at the expense of those who suffer under the weight of their tax-free prosperity.

Wherever an economic boom can coexist with rampant poverty and homelessness, there is reason for suspicion toward politicians who claim that such problems are intractable while extolling the success of the city’s wealthiest.