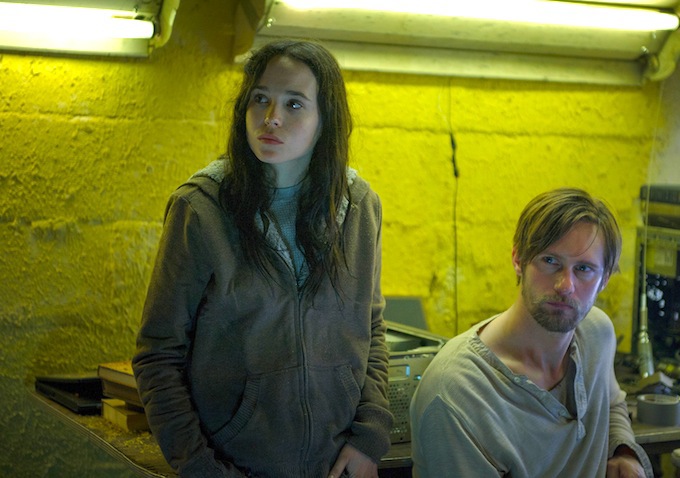 Then there’s the realist take, which depicts radicalism in a more nuanced and morally ambiguous manner.  Like The East, the 2002 German film The Baader-Meinhof Complex, a biopic about the 1970s Marxist-Leninist group, takes this realist approach.  In these stories, death has genuine consequences and raises significant moral quandaries for the characters, particularly the protagonists with whom we are forced to sympathize.  Even a big-budget blockbuster like The Dark Knight Rises could be said to fall into this category, despite its conservative message.  With its themes of populist uprising and revolt—modeled after the French Revolution but widely interpreted as references to the Occupy Movement—Bruce Wayne’s quandary is not to fight for the common good, but rather to interpret what “common good” actually means; an industrialist to the core, ultimately Mr. Wayne throws his weight behind the state’s military-industrial axis, believing they best represent the vox populi.

Because The East takes the realist approach, we know from the beginning that the protagonist, Sarah—a young and sharp corporate-type working for a private intelligence firm, played with brio by Brit Marling—is not going to side with the gun-toting revolutionaries.  That would violate the aforementioned rule of Hollywood ethics, and likely irk the moneyed producers.  We suspect entering the film that Sarah is, in the mold of the rugged American individualist archetype, going to forge her own path.

A young recruit at a corporate intel agency, Sarah is tasked with infiltrating a cell of so-called eco-terrorists whose destructive pranks have been wreaking havoc with corporate profit margins. The cell, who call themselves “The East,” releases YouTube footage to the public after each successful “jam”—essentially, meticulous anti-corporate pranks, a nod to Adbuster editor Kalle Lasn’s concept of “culture jamming.”

Rather than see any of The East’s manifesti or hear any reference to their inspirations, we are instead treated to psychological profiles, revealed slowly and occasionally unsubtly through dialogue.  Doc (Toby Kebbell), a scruffy and brooding doctor, is afflicted by Parkinson’s-like shakes after being treated with a supposedly safe antibiotic.  Izzy, played with quirky vitality by Ellen Page, is running from a family with ties to the military-industrial complex. For each character, the urge to rebel arises from their own personal feelings of being wronged, and a desire for retribution.  Hence, The East’s philosophical forebear is more Robin Hood than Bakunin or Bookchin.

Luckily, the screenwriters resisted the urge to insert any “good” or “bad” guys here.  Indeed, the corporate-bourgeois types are depicted as far more ethically compromised than the scrappy folk-heroes that comprise The East. The film touches on social and political issues including environmental justice, sexual assault, police brutality and cronyism, all of which Sarah is privy to.

The East does an excellent job of framing these questions and issues.  The viewer is treated to the internal machinations of Sarah’s mind as she becomes increasingly alienated from the corporate-military axis represented by her employer.  Since this is an A-list Hollywood flick, we know from the beginning that the filmmakers aren’t going to side with the trouble-making, faintly violent revolutionaries.  Yet the viewer is also left with few sympathies for the corporate power elite.

Disappointingly, the film falls back on the shaky moral code of all Hollywood blockbusters: violence is only justifiable in self-defense, and even then, one must avoid harm at all costs.  Sarah, being allied neither with the The East (who harm in retribution) nor the corporate power elite (who harm via the profit motive), sees herself as above either of these foes.  A brief study of the opposing forces at work in Syria or Egypt is enough to confirm that the real world is not this simple.  The film concludes with an unbelievable plea for liberal reforms—the preferred means of change for those moneyed producers, who seem dead-set on the belief that change comes about solely through regulation and transparency.

Yet those of us raised in the age of Snowdens, Assanges and Mannings know that transparency does not guarantee democracy; rather, it sometimes has the opposite effect, and exposing totalitarianism can even strengthen it.

There is a brief scene in The East in which an unnamed character, a rural mom whose son is disabled due to exposure to mining-related chemicals in the water, describes how her attempts at justice failed; it seems no one listens nor cares when the underclass is victimized by the mining industry’s abuses. One might ask the screenwriter: why would Sarah’s attempts at exposé draw attention where the rural mom failed?  This leads to the unsettling conclusion that Sarah’s class and whiteness give her political power denied to the rural mom.

This parallels a realization many of us having been having of late; namely, that the poor and underclass have virtually no political power.  Sociology confirms this; In Larry Bartels’ landmark study Unequal Democracy, his researchers found that “the preferences of people in the bottom third of the income distribution have no apparent impact on the behavior of their elected officials.”  Of course, this has many disturbing racial implications as well, since those in the bottom third of the income distribution are more likely to be persons of color.

The film implies that the ragtag, multicultural East are fighting against exactly this kind of multi-fanged inequality.  Being armed with direct knowledge—of corporate malfeasance, institutionalized racism and classism—is enough to make anyone transition from concerned citizen to saboteur, as the film successfully illustrates.  Unfortunately, because The East’s activism is predicated on minor acts of violence, their radicalism is swept aside in favor of Sarah’s milquetoast pragmatism, predicated on her WASPy power.