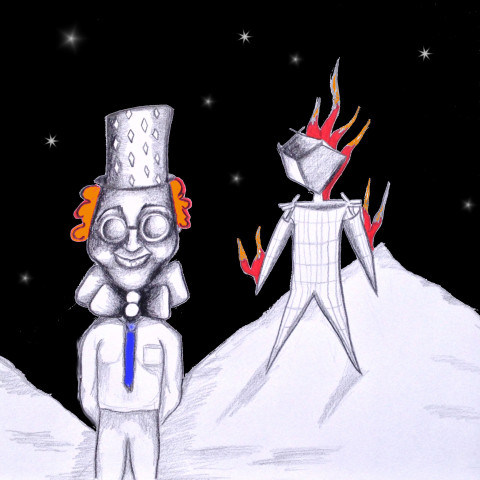 The teach-ins of the 1960s spawned numerous other “-ins”—including work-ins, sit-ins, and John Lennon and Yoko Ono’s “bed-in,” in which the two stayed in bed for a week to promote world peace. With work-ins, workers occupied factories and kept producing goods, to prove their ability to work and self-manage without bosses. While John and Yoko’s bed-in was more akin to an awareness-raising stunt (not unlike the Ice Bucket challenge), work-ins and sit-ins were powerful forms of protest that asked workers and students to divert from their normal routines in order to question what it meant to be taught, to work or to occupy.

Yet there was one more, odder type of -in that spawned off from SDS’s teach-in: the be-in. In a be-in, there were no clear goals, no obvious unified cause or idea to be taught—one simply went, and then… you were “in.” The most famous Be-ins, including the Human Be-in in Golden Gate Park and the Central Park Be-in of 1967, were described by reporters as embodying anti-war movement aims through a “consciousness shift” of the kind that typified the American Hippie movement.

The idea of a “consciousness shift” strategy to social change was, conceptually, very different than other left strategies for social change. A consciousness shift didn’t imply structural change, legislative action or violent revolution. Rather, it was more the idea that a sudden change in collective thought—whether from drugs like LSD, or spontaneous street theater as the Situationists advocated—would bring about a new, non-specific but peaceful society.

Yet the Be-ins befuddled anyone accustomed to traditional political organizing, both on the New and Old Left. Be-ins didn’t have a coherent political goal, though they spoke to the language and cultures of social movements. By being purposely vague, Be-ins were more akin to what modern-day marketers might call “brands”: people attended in order to identify with a movement, even as there was no real movement present, just as people buy designer products to identify with a manufactured brand identity. In any case, the ideological vagueness of the Be-in distinguishes it from teach-ins or work-ins, which challenged the hegemony of educational institutions and employers’ doctrines.

Indeed, the politics of the Human Be-in in Golden Gate Park could be best described as drug law abolitionism with a side of anti-authoritarianism. Political writers did not headline, unlike at SDS’s teach-ins, and there were no labor leaders either; rather, the main events were the Grateful Dead, Timothy Leary and Beat poets like Allen Ginsberg, Lawrence Ferlinghetti and Gary Snyder. LSD was distributed freely; having been outlawed a few months prior, the first flyer for the Human Be-in had specifically mentioned fighting the federal ban.

The aftereffects of the Be-in are arguable. Likely it had resounding cultural repercussions, as renowned poets and musicians met and collaborated; yet in this sense, it was not too different from Woodstock or Lollapalooza. What it was not was a political event; the “consciousness shift” they fought for never really happened, or if it did, seems not to have upset business as usual.

Silicon Valley has always benefitted from its proximity to San Francisco and Berkeley, the hotbeds of the 1960s counterculture. What they reap from it, culturally, is not the fiery anti-war, anti-capitalist aspects of counterculture organizations like SDS—recall that SDS considered itself the militant white counterpart to the Black Panthers—but rather the non-normative individualism of the Hippie movement, typified by Be-ins and the concept of the “consciousness shift.” This, along with “disruption” and “innovation,” are key words to Silicon Valley, as if theirs were the only corporations fighting against some vast, numbing totalitarianism; this sentiment often reifies itself in terms of advertisements, such as Apple’s dystopian “1984” television advert (discussed previously in this video article), which depicted Apple as the liberatory antidote to the brainwashed, policed masses enslaved by IBM.

Indeed, tech brands gain consumer approval from the belief that they are “different” somehow from other corporations, guided by ulterior motives. Just as Steve Jobs credited his acid trip as spiritually formative in the creation of the Macintosh, current Apple CEO Tim Cook is insistent that the company’s mission goes beyond profit (even as they have more money on hand than the Federal Reserve).

[CEO] Cook [said], “We want to leave the world better than we found it.” But Cook didn’t stop there. He suggested that anyone who had a problem with the company’s [social mission] should sell their shares in Apple. “Get out of the stock,” he said.

It’s easy to make such grandiose statements when you lead one of the most profitable companies on Earth. (It is doubtful he’d be saying the same thing if the company were restructuring due to bankruptcy.) And it’s similarly easy to say you’re leaving the world “better than you found it” by being as non-specific as possible. Vagueness is a facet of corporate social change ideology, from be-ins to corporate boardrooms—the vaguer you are, the less you need promise.

Hence Silicon Valley benefits from the fragmentary Hippie culture, while channeling what it chooses and ignoring the more politically radical, anti-capitalist moments—a lot of Beatle, not much Black Panther. The Hippie-bred image of police and authority as “squares” who don’t understand the young generation bleeds, easily, into an anti-government capitalist libertarianism inherent to nearly all high-level tech executives and venture capitalists, from Paypal and Facebook angel investor Peter Thiel to Craigslist namesake Craig Newmark. The language of the counterculture and of libertarianism can be easily substituted: “The man” becomes the government in all its articulations; “oppression” becomes laws and regulations that inhibit profit. The deep individualism is common to both the counterculture and the consumerism of tech.

The explosive growth of tech culture has merged seamlessly with the great modern day be-in: Burning Man. Burning Man was originally founded in San Francisco in the mid ‘80s, a free-for-all bonfire party on Baker Beach that channeled the free expression of the ‘60s counterculture, the whole event culminating with the burning of a giant effigy (the eponymous Man). The effigy burn stoke the ire of the San Francisco authorities, wary of large fires within city limits. Seeking a less-crippling regulatory environment (echoing modern-day tech companies), the event moved to the barren Black Rock Desert of Nevada, where it has increased in size and scope for years.

For those who haven’t attended or been privy to its culture, Burning Man defies simple description. Billed as a “radical” festival of “self-inclusion,” “self-reliance” and “self-expression,” the festival brings thousands to a barren desert in Nevada, all of whom bring something. What is not proscribed, and this is part of the freedom of the event.

As a former attendee, I would argue that the “radical” moniker is not altogether appropriate. For those of us from the Bay Area, Burner culture—of Dune-inspired fashion and a “live and let live” mentality—is not particularly unusual. Rather, this culture is reminiscent of the Gay Pride Parade, Folsom Street Fair or Bay to Breakers, both in costume and vibe. Though these four festivals have different ideologies, they all feature bizarrely-costumed attendees in various states of undress celebrating their ability to dress bizarrely or not at all (not to mention get drunk, do drugs, and Instagram their experience). This is entertaining, though—unless you grew up in rural Utah—not particularly radical. 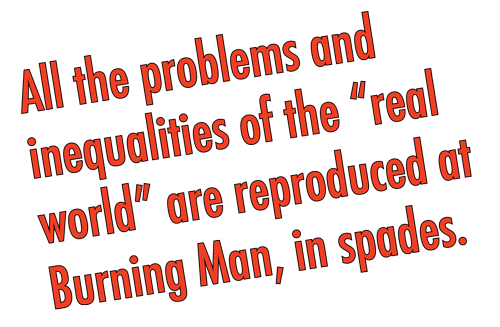 Indeed, politically Burning Man is far from radical; it’s simply liberal in the sense that it celebrates social libertarianism, much like the San Francisco counterculture scene in its heyday. But all the problems and inequalities of the “real world” are reproduced in Burning Man, in spades, thus limiting its ability to cultivate radicalism. Income inequality reproduces itself structurally; when I attended on a scholarship (yes, they once had scholarships), I was confined to a greenhouse-like tent like the rest of the hoi polloi; the affluent rent buses and luxury RVs, and even hire caterers to attend with them.

The income demographics of Burning Man are actually quite well-documented, thanks to a Burning Man census project that has been going on for years. In the past decade, the number of attendees whose incomes top $100,000 a year has about doubled, from 11% to 21% of attendees. Attendees making less than $50,000 a year have shrunk overall. Overall, the income demographics resemble what is called in statistics a trifurcated distribution, meaning that there are a lot of lower-income people and a lot of upper-income people and not as much in between. Remarkably, the income map looks just like San Francisco, which is trifurcated between working-class poor (<15K), middle class (50-75K) and upper class (>200K). Many billionaires are known to attend: far-right anti-tax icon Grover Norquist, Facebook CEO Mark Zuckerberg (who helicoptered in for a single day), and Google founders Larry Page and Sergey Brin are all Burners. Black Rock City, the temporary city created by the festival, has its own Billionaire’s Row where tech capitalists huddle, and which a few intrepid burners attempted to infiltrate this year and were greeted with hostility. (So much for radical inclusivity.)

The be-in is an apt metaphor for Burning Man: “Being” there, you are then… in. It is brand marketing at its finest, ethereal, empty slacktivism. There is nothing radical about the festival; were there, the wealthy capitalists who attend wouldn’t be able to do so comfortably. Yet to them, it’s a chance at lifestyle tourism, another check on the bucket list, and a week at an otherworldly place that is so inclusive, in fact, that no one would dare confront them for their exploitation and economic predation in the real world. Burning Man is a brand that symbolizes the same kind of false utopian ideals embodied in tech corporations’ doctrines: the promise of “changing the world” without bothering to think of how one might be contributing to the same problems that need changing.