As #blacklivesmatter protests grip the country, new political fissures have opened. Predictably, there are those on the right who dismiss racist police violence as a non-issue. On the left, however, the situation is more interesting: there is a dividing line between the outraged, and the moderates who balk at what they see as “violent protests.” Broken windows, smashed storefronts, and public transit disruptions upset the liberal mindset. Their huffiness is on display in the comments sections of subtly-slanted news sites like SFist: 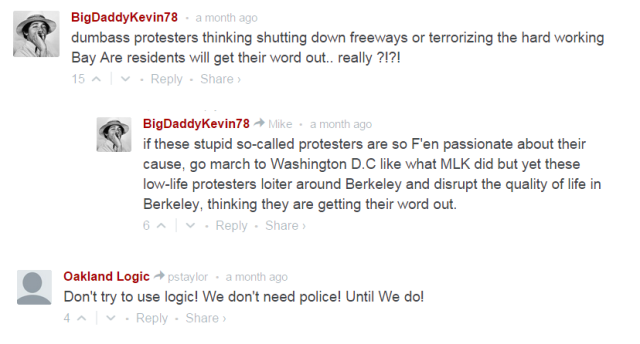 The protests are justified, they write. The “looting” is not. Where’s the line?

The line wavers depending on what you think the function of the police is. The working class and radicals alike tend to see police as the foot-soldiers of the 1%—defenders of a propertied-owning class that owns and controls the poor, whether through rent, wage-slavery, or the prison-industrial complex. (At Millions March Oakland, one protest sign read: “A black man is worth zero to a corporation when free; in jail, the same man is worth $40,000 a year.”) In the ghetto, the police act as repo man, debt collector and security guard rolled into one; yet these free-of-charge services are available only to the gentry, not the serfs. Landlord wants to gentrify or collect more rent? The police will carry out the eviction on their behalf, no questions asked. When a poor black man turns to theft to survive a system that’s disenfranchised him? The police defend store owners over the starving. 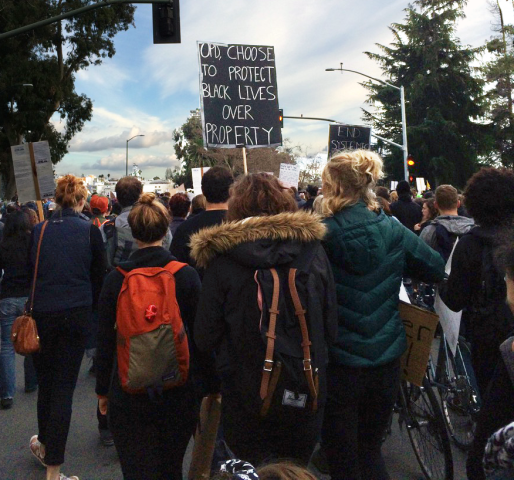 One sign at the Millions March Oakland reads: “OPD, choose to protect black lives over property.”

Yet the middle- (and upper-) class liberals—including vocal, computer-adept sophists that flood comments sections—don’t experience police in the same way. Where systemic racism against people of color thrives, the reverse—special treatment for the rich and white—does too. Yet this special treatment is invisible from their perspective, internalized as normal. White liberals’ own experience of policing is mediated by this fact. 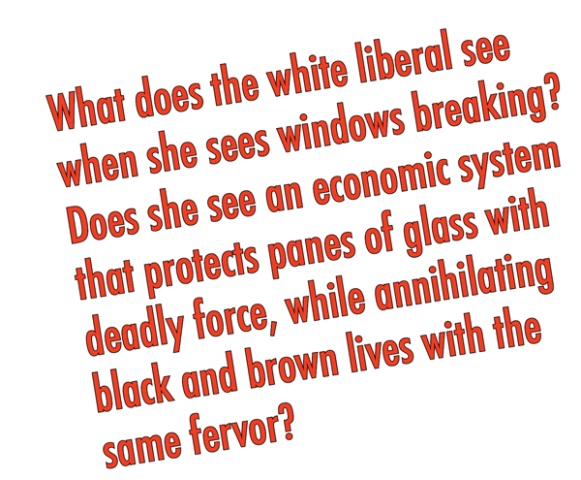 What does the white liberal see when she sees windows breaking? When she sees Berkeley cops beating protesters for smashing storefronts? Does she see what the rioters see—an economic system that calls upon authority to protect panes of glass with deadly force, while annihilating black and brown lives with the same fervor? Do they see an asphalt wasteland of minimum wage service jobs, exploitative employers salivating at the chance to prey on an underclass that has no other option? Do they see a genocidal nation-state that isn’t worth saving, that could kill their children with impunity at any minute, that indeed, kills a black person every 28 hours?

I don’t think that’s what the white liberal sees. They see “chaos” creeping towards their property line. They see a system wither—a system that, for all its flaws, benefits them—and fear for their belongings. They see a mass of dark-skinned faces taking things that they, in their own words, would pay their “hard-earned money” for. Through racist codewords, they call out those that chip away at their own chains.

When the system benefits you, it’s tough to recognize it as wrong.

There is a racism lurking in the liberal worldview. Their complicity reinforces and keeps this racist system running. They see racism as a carnivorous beast separate from them, when in fact they are saddled on its back.

For movement-builders, the challenge is getting liberals to hear the voice of the unheard.