One notable response to the industry culture was Lil’ Kim’s 2000 song “Suck My Dick,” an aggressive ur-feminist reaction to the breed of mainstream hip-hop culture that glorifies sexism and objectifies women. On “Suck My Dick,” Lil’ Kim delivers a harsh response in the same vein as the sexist lyrical mode she emulates. She pulls out all the same tropes—glorification of her genitals (“Imagine if I was dude and hittin’ cats from the back/ With no strings attached / Yeah n***a, picture that! / I treat y’all n***as like y’all treat us”) and demands of oral sex and money (“All I wanna do is get my pussy sucked / Count a million bucks in the back of an armored truck”).

I don’t think her slightly tongue-in-cheek satire was, at the time, appreciated in intellectual hip-hop circles. Indeed, Rolling Stone reviewed the record well but also dismissed it as “party music.” Yet beyond being party music, Lil’ Kim mounted a response to a hip-hop culture that excluded people of her gender, or worse, confined them to bit parts as sex objects—which was technically Kim’s “debut” in the music industry, as the moaning woman on the Notorious B.I.G. skit “Fuck Me” from Ready to Die. Ironic, indeed, that she had to accept and experience objectification in order to be given a shot at a music career.

In addition to being pretty sexist, it should be self-evident that mainstream nineties hip-hop was also rampantly homophobic (see: Eminem, DMX, Jay-Z). It attests to the success of the LGBTQ movement that, in the last few years, it has become culturally unacceptable to be blatantly homophobic in hip-hop; nearly every platinum-selling rapper who at some point used the f-word has since apologized.

So it is somewhat surprising to think that V.I.P.’s Mad Coke E.P. was released a decade ago, in 2004—around the same time that Eminem’s platinum-selling, slur-laden Marshall Mathers LP was getting airplay. (In other words, in 2004 it was still totally fine to use the f-word excessively and be a platinum-seller.) V.I.P. were a trio of working-class, white gay rappers from Philadelphia; in their outfits and lyrics, they played up their glamour and effete fashion sense, all while rapping (often with tongue-in-cheek) about poppers, Viagra, leather daddies and anal sex. Online, their openness and hyper-sexual lyrics were met with vitriol; I recall scores of unmoderated, homophobic slurs on V.I.P.’s MySpace.

V.I.P.’s songwriting was not particularly complicated; their backing instrumentals consisted of standard house beats with above-average hooks, over which they would rap quickly and usually with a trademark lilt. Their innovation derived from their ribald themes, and how sharply they contrasted with the homophobic mainstream; consider that a year earlier, in 2003, DMX had actually said, on “Where Da Hood At?”, that he would never shake a gay man’s hand.

Just as Lil’ Kim took the tropes of a sexist, phallocentric hip-hop culture and reversed them, V.I.P. take the same tropes and invert them (pardon the pseudo-pun):

Three treatments deep with the HPV

Already I’m back and I’m on my knees

Could someone tell me please who gave it to me?

Um let’s see, well it couldn’t have been that little teeny,

‘Cuz from what I hear I took his virginity,

Maybe that leather daddy that somehow forgot to pay me

And it couldn’t have been that boy Rocky

‘Cuz I only jerked off for him to see…”

This transgressive tendency really reached its apotheosis in “Buut Wallz,” released informally via the group’s MySpace. In retrospect, the song has thematic ties to Mickey Avalon’s lyrically inferior “My Dick”—namely glorification of one’s genitals—yet in V.I.P.’s case, what is glorified is on the other side. The shock-value to straight folks—or to anyone who’s a bit squeamish, really—made the song hilarious and transgressive; by any measure, V.I.P. is a pretty raunchy trio, and I’d guess they set the record for rapping about STIs. Indeed, anal sex and STIs are two mortal taboos in any musical genre (and even in real life); it takes a lot of chutzpah to transgress those boundaries, especially in a self-deprecating way. 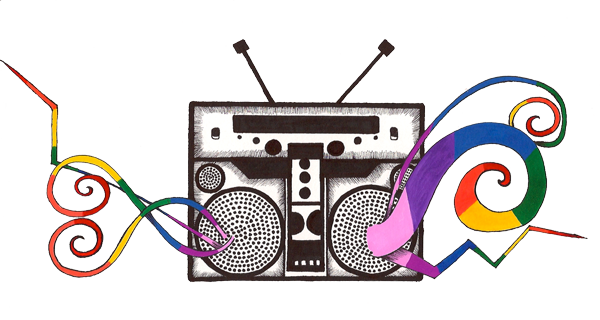 In theory, glorifying one’s butt walls, as the song does, shouldn’t seem more shocking than glorifying one’s penis. In practice, however, the song has the potential to make uncomfortable every straight male frat boy in the vicinity.

My butt walls are so sweet,

When I pump it to the beat,

Every boy that calls

Our heteronormative culture teaches us to exalt our phalluses (as skyscrapers attest). The same culture says little positive about the male anus. I was saddened when V.I.P. disbanded in the mid-aughts; it seemed that they still had much work to do. Yet shortly thereafter, hip-hop was inundated with a plethora of gay, bi, queer, and trans* rappers, many of whom achieved staggering success, e.g. Mykki Blanco, Big Freedia, Jonny McGovern/Gay Pimp, and Frank Ocean. Yet there may not be another as raunchy or clever as V.I.P., and it could be that by breaking down walls (pun definitely intended) they paved the way for those to come.

If you enjoyed this Marxist Mixtape, there’s plenty more where that came from.