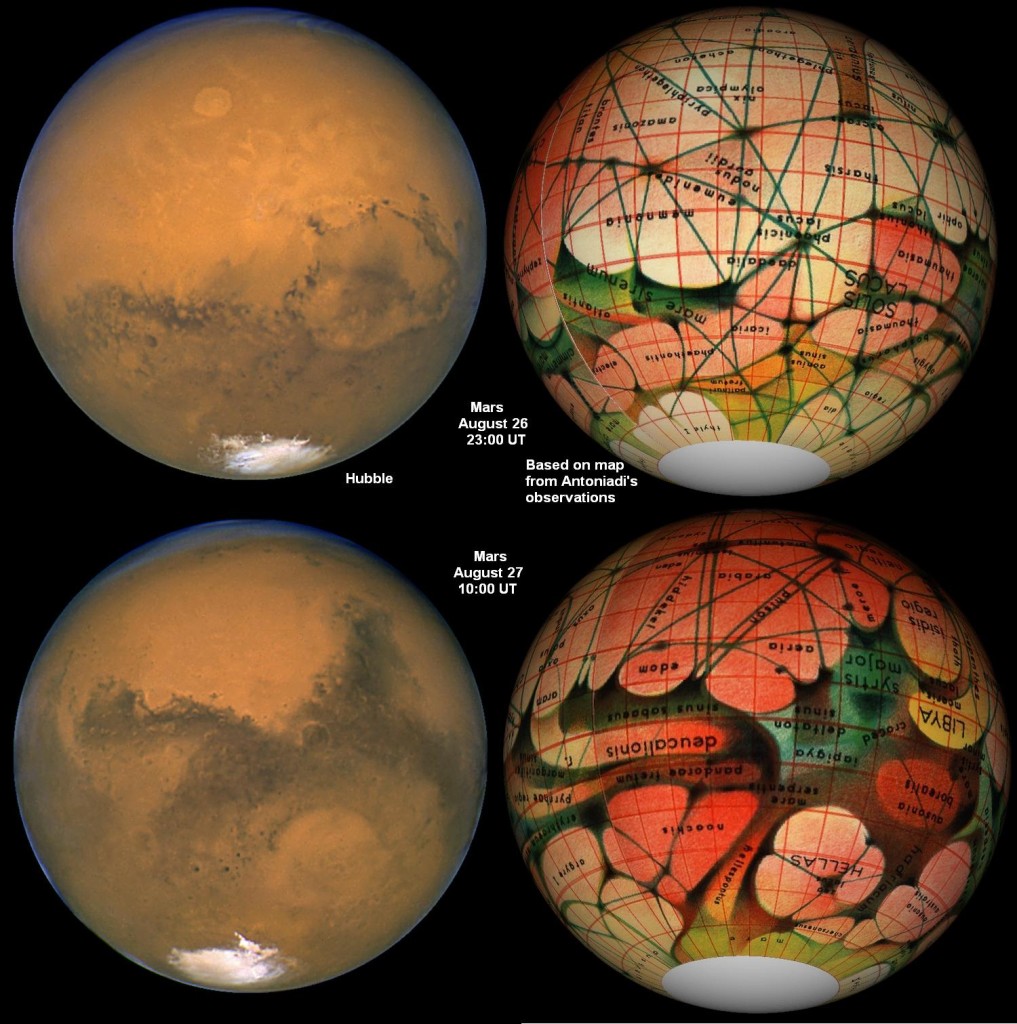 A map of the so-called Martian canals, an optical illusion witnessed by astronomers in the late 19th century. Image courtesy NASA.

A Popfront contributor wrote how scientists and businessmen project our economic system onto the stars:

Have you ever seen an alien? Scientists haven’t, but that hasn’t stopped them from speculating that imperialist extraterrestrials could be on the way.

With the exception of one inconclusive blip in 1977, we haven’t detected signs of alien intelligence. Having scoured our solar system with probes and turned up empty, extraterrestrial (ET) signal searchers now survey the galaxy on the radio portion of the electromagnetic spectrum, where photons can traverse interstellar distances and arrive on Earth unscathed.

The most prominent and well-funded organized effort to search radio bands is led by the SETI (Search for Extraterrestrial Intelligence) Institute, a private nonprofit foundation that borrows time on radio telescopes or scans the skies using their own arrays.

While the SETI Institute has been actively searching for forty years, there have been few attempts to send out focused radio signals of our own towards presumptive inhabited worlds. This poses a conundrum: why should humans expect aliens to send out focused “hello” signals of their own, if we do not do it ourselves? This idea, that we should send out messages in addition to listen for them, is known as “Active SETI.”

In the past we’ve always assumed that any extraterrestrial civilization with the capacity to detect us will automatically take the initiative to make contact, sending us a powerful signal to let us know they exist. . . . But there may be civilizations out there that refuse to reveal their existence unless we make it clear that we want to make contact.

This February, at a symposium at the American Association for the Advancement of Science Convention in San Jose, Vakoch proposed that we stop only listening and start talking too. Vakoch’s words touched off a dispute that culminated in an open letter warning of Active SETI’s risks, signed mostly by scientists but also by Tesla/SpaceX CEO Elon Musk, science writer George Dyson, and science fiction author Paul Davies.

This isn’t the first time scientists have sounded the alarms about Active SETI. Physicist Stephen Hawking argued against contacting ET, in a prophecy seemingly cribbed from the Independence Day screenplay:

We only have to look at ourselves to see how intelligent life might develop into something we wouldn’t want to meet. I imagine they might exist in massive ships, having used up all the resources from their home planet. Such advanced aliens would perhaps become nomads, looking to conquer and colonize whatever planets they can reach.

Back in 2006, an editorial appeared in the pages of Nature arguing that, while the chances are “remote,” actively messaging aliens poses “small but real dangers,” including the possibility of “alien ‘black-ops’ specialists working out ways to exploit” human psychology based on intel from our radio messages.

Let’s take a step back and consider these warnings, made in earnest by this group of scientists, engineers and businessmen. Are their assumptions and predictions about alien life grounded in science and logic?

If we look to the way that neoliberalism has shaped our thought and culture, fears about ET map perfectly. Aliens could be potential competitors for resources, they claim — presumably, having left their home planet to exploit, extract, and enslave, following a pattern not dissimilar to what unfolded over four hundred years of global capitalism.

Aliens could be imperialists, leaving their home planet to colonize and mold humanity to their own social and political logic — like the American colonial projects in Iraq, Afghanistan, and any of dozens of other countries over the past century.

Tellingly, aliens are projected to possess the same technological triumphalism as Silicon Valley, equating “technological advancement” with “progress,” even when the two have little to do with each other. In their theoretical hostility, the aliens could have a certain machismo we lack: the consummate corporate competitors, with more so-called technology, more violence, and more willingness to use force.

This is not science. This is hegemony at its most powerful and invisible, posing as logic. In these fears, we see a soup of recent historically specific troubles, blended and projected. Anti–Active SETI co-signers see imperialism as universal, quite literally — that is, extending across the universe.